The suits challenging the APC convention scheduled to hold in February and the Mai Mala Buni leadership were filed at the Federal High Court in Abuja between December 2021 and January 2022.

The planned February 2022 national convention of the ruling All Progressives Congress (APC) may be under threat as some aggrieved members of the party have filed a suit to stop it.

Another suit by an aggrieved member seeks the removal of Yobe State Governor, Mai Mala Buni, as the caretaker chairman of the party.

Both suits were filed at the Federal High Court in Abuja between December 2021 and January 2022.

In the suit filed against the planned February convention, five aggrieved party members sued the APC, Yobe State, Mr Buni, and the Independent National Electoral Commission (INEC), as the defendants.

The plaintiffs – Suleiman Usman, Muhammed Shehu, Samaila Isahaka, Idris Isah and Audu Emmanuel – through the suit dated January 4, 2022, urged the court to restrain the Buni-led Caretaker/Extraordinary Convention Planning Committee from going ahead with the scheduled convention.

Already, the governors elected on the platform of the APC, known as the Progressives Governors Forum, have planned a meeting for this weekend in Abuja, at the Kebbi State Governors lodge in Asokoro.

There has been a clamour for a change in the date of the scheduled national convention.

In the case with suit number FHC/ABJ/CS/3/2022, the plaintiffs, through their lawyer, Olusola Ojo, prayed the court to stop the convention on the grounds that state congresses are yet to be completed in all the 36 states of the federation.

The plaintiffs raised five questions for the court to determine and also sought eight declarative reliefs.

The plaintiffs prayed for, among others, an order “restraining the 1st (APC) and 2nd (Mr Buni) defendants from organising and conducting the national convention of the 1st defendant unless state congresses of the 1st defendant are first concluded in all the 36 states of the federation and the Federal Capital Territory.

In a similar suit, an APC youth leader, Zahrah Audu, urged the Federal High Court in Abuja to restrain Mr Buni from parading himself as national caretaker committee chairman of the party.

The APC, Mr Buni and INEC are sued in the suit as the 1st, 2nd and 3rd defendants, respectively.

She urged the court to declare that Mr Buni’s position as the current governor of Yobe State creates a situation that will prevent him as the National Chairman Caretaker Extraordinary Convention Planning Committee of the 1st defendant (APC) from functioning in view of the provision of section 183 of the 1999 constitution of the Federal Republic of Nigeria (as amended), Article 13.2 (A) (vii) and 17 (iv) of the All Progressives Congress (APC) Constitution as amended.”

Other prayers sought by her are: “A declaration that the appropriate organ of the 1st defendant to validly fix a date and/or convene the 1st defendant’s national convention is the board of trustees of the APC.

“An order restraining the 2nd defendant (Mr Buni) from parading himself as the National Caretaker Extraordinary Convention Planning Committee of the 1st defendant while still holding the post of the governor of Yobe State concurrently.

“An order setting aside the date (February 2022) earmarked or announced by the 2nd defendant for the holding of the National convention of the APC.

“An order directing the 3rd defendant to desist from recognising the 2nd defendant as the National Chairman Caretaker Extraordinary Convention Planning Committee of the APC.

In the affidavit filed in support of the suit, the plaintiff, Ms Audu, said she is the Chairperson and Coordinator of Progressives Youth Movement, a support group of the party.

She said in the court document seen by this reporter that the PYM’s core mandate includes mobilising youths and ensuring synergy within the party and that activities of the party are in compliance with the provisions of its guidelines and constitution as well as the Nigerian constitution.

Meanwhile, no date has been fixed for the hearing of the two cases.

Mr Buni was appointed the chairman of the APC’s Caretaker/Extraordinary Convention Planning Committee (CECPC) in June 2020 to stabilise the party as internal storms which eventually saw to the exit of its former chairman, Adams Oshiomhole, threatened its future.

A little calm was restored to the party with the President Muhammadu Buhari-backed appointment of Mr Buni.

But the suppressed troubles have escalated after a decision of the Supreme Court in July last year cast some doubts on the legitimacy of Mr Buni’s leadership of the party as well as the legality of its actions, including the nomination of candidates for elections and conduct of the party’s conventions.

The Supreme Court, by a 4-to-3 split decision of its panel in July 2021, affirmed the victory of APC’s Governor Rotimi Akeredolu in the last gubernatorial election in Ondo State, but was not categorical about the validity or otherwise of Mr Buni’s leadership which nominated Mr Akeredolu as the party’s candidate for the election.

This, according to Mr Jegede and the PDP, was because Mr Akeredolu’s nomination was supervised by Mr Buni, whom they said was illegally doubling as the APC chairman and the Governor of Yobe State in violation of the Nigerian constitution.

The majority decision of the Supreme Court panel had simply dismissed Mr Jegede’s appeal on the grounds of failure to join Mr Buni as a respondent. It said, with the allegations levelled against him, Mr Buni was a necessary party that should have been joined for the suit to be competent.

With the APC escaping the judicial hammer by a whisker, some legal voices within the party, including the Minister of State for Labour and Employment, Festus Keyamo, a Senior Advocate of Nigeria, warned that the judgement held an uncertain future for the APC if Mr Buni was not immediately removed as the leader of the party.

But the party leadership and the Attorney-General of the Federation, Abubakar Malami, have dismissed such suggestion, which they said gave a wrong interpretation to the Supreme Court’s verdict.

Some party members have, however, latched on to the Supreme Court verdict to file a suit seeking Mr Buni’s removal and stopping the party’s convention.

The division in the party has serially led the party to postpone its convention now rescheduled to hold in February.

Relying on the Supreme Court decision, PDP also filed a suit at the Federal High Court in Abuja in August 2021, praying for the sacking of Mr Buni as Yobe State governor. PDP argued in the suit that combining the governor’s office with another executive position as APC chairperson is a constitutional violation.

The opposition party asked that its governorship candidate in the 2019 election, Umar Damagum, and his running mate, Baba Aji, should be sworn in as replacements for Mr Buni and his deputy.

President Muhammadu Buhari has said in recent times that the internal squabbles in the APC could undermine its victory in the next general elections.

In an interview with the Nigerian Television Authority (NTA) on Thursday, Mr Buhari said the APC may lose the 2023 presidential poll to either the Peoples Democratic Party (PDP) or any of the opposition political parties if the ruling party does not put its acts together.

He spoke against the backdrop of disagreement on some issues around the APC convention slated for February.

PREMIUM TIMES reported that one of the reasons the ruling party has not fixed a particular date for the convention is because the governors and some senior members are canvassing the option of a consensus candidate.

Mr Buhari had said he is not a kingmaker and that those who want power should work for it.

He said if he yields to the pressure from the governors, which he did not specify, the chances of the party in the coming general elections may be jeopardised.

While February has been fixed for its much anticipated national convention, the APC has not made public the exact date for the event.

This, to an extent, has continued to raise speculations of a possible plot to extend the tenure of the Mr Buni-led caretaker committee.

As enshrined in Section 85 (1) of the Electoral Act, a political party is expected to give the Independent National Electoral Commission (INEC) at least 21 days notice before holding a convention, congress, conference or meeting convened for the purpose of electing members into any leadership seat.

Going by the provision, the party has between January 7 and February 9 to make its decision known to the INEC. 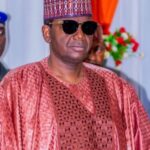