Protesters under the aegis of the Youth Wing of the All Progressives Congress on Thursday stormed the national secretariat of the party in Abuja to register their disapproval over alleged plans by the party to impose a presidential candidate on them.

The protesters numbering over 100 stormed the party’s headquarters about 8 am and disrupted vehicular movements along Blantyre Street.

Addressing journalists, the convener of the group, Alhaji Toyin Rahim, wondered how the party would justify bringing someone they had called corrupt and incompetent back to power.

The group, in a letter titled, “The Destructive Potentials of a Goodluck Jonathan Presidential Candidacy for the APC”, addressed to the National Chairman of the party, Senator Abdullahi Adamu, was submitted by its Chairman, Mr. Toyin Rahim to the party, insisted that Jonathan’s project will not fly.

The group pointed out that one of the most telling negative implications of such an action was that the APC does not have anyone of electoral value who could win an election for it, except it smuggles in a former president that the party defeated seven years ago for his glaring incompetence.

He advised the leadership of the party “not to fall victim to deill-advised action that can push the party out of power”.

He said, “The rumour has been around for some time now that former President Jonathan of the was being wooed by some power players within the APC to join the Party and fly its presidential ticket for the 2023 election.

“What began as a mere rumour seems to be gathering momentum so close to the presidential primary of our great party.

The group emphasised that it would also be an indictment against President Muhammadu Buhari for making Nigerians believe that APC lied to them when it said Jonathan performed woefully and that Buhari would do better.

The group, therefore, demanded an immediate categorical statement from the party’s leadership that such a project to import and impose Jonathan as APC’s presidential candidate was not being contemplated.It said this demand represented an overwhelming majority of opinions in the party across the board nationwide.

This Jonathan project cannot fly simply because it cannot help our party and we want to do our best to ensure that our Party does not fall victim to ill-advised action that can push the party out of power.

“It is certain that any attempt to give Jonathan a free presidential ticket of the APC will see the mass exodus of critical stakeholders from the Party and make the party lose power.”“Are we now saying we lied to Nigerians and that we have now discovered that Jonathan was much better and that he should return to continue his good works that nobody can see?

“One thing our party leaders must know is that if for any tragic reason the mistake is made to impose Jonathan on APC and the goodwill of our party and that of Mr. President make him win and he becomes president again, the likelihood of him switching loyalty to PDP is high.” 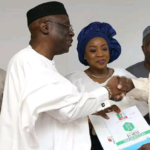 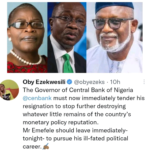