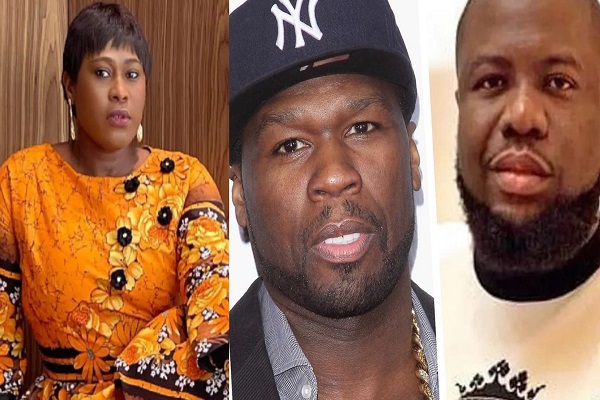 He informed his followers and movie lovers about his desire to put out a project centered on scammers inspired by Hushpuppi, who was finally sentenced to 11 years and three months in federal prison, US for conspiring to launder tens of millions of dollars from online scams.

Reacting to 50’s declaration, Jumbo commented that a Nigerian movie star be accorded the chance to play Hushpuppi’s character in his anticipated movie.She said: “Please give a Nigerian actor the opportunity to play this character.”

Hushpuppi, who was described by the FBI as one of the world’s most prolific money launderers, was recently sentenced to 11 years imprisonment in the U.S, for his efforts to launder millions of stolen dollars.

Announcing his plans to adapt the true life story of Huspuppi in a series, 50 Cent shared pictures of the Nigerian socialite on his official Instagram and Facebook pages.

“For my scammers I gotta do this one, Hushpuppy series coming soon,” the rapper who owns the G-Unit Films and Television Inc. announced.

His post has continued to generate different feedback while actors lobby for roles in the docu-movie, many Nigerians aired their different opinions about the project.Nollywood actor, Deyemi Okanlawon pitched his tenth for the Hushpuppi’s movie role, “Yo @50Cent… I’ll love to audition to play Hushpuppy.”Supporting his colleague, actress Ufuoma Mcdermott said, Deyemi – you’ll kill this role. You are best suited to play Hushpuppi.”

One-half of the Afrobeat music duo, Skuki Peeshaun expressed his mixed feelings saying: “Sigh… I’m having mixed feelings! Nollywood how did we let this slip past us? Damn!”

A fan Laureta Amoni said: We Nigerians are wonderful people all over the world, though really can’t wait to see the series.

“Oh, my guy hush has made it big. 50 cent now linking up with Hush baby,” said MooreLighti

Another fan, Odey Paul Linus : 50 u got to come to Lagos to film this series, it got to be real.

“Here is an actor that can accurately portray Hushpupp