Although many believed the Osun governorship election was a two-horse race between Governor Adegboyega Oyetola and Senator Adeleke, no fewer than 15 political parties partook in the election.

Other candidates included Akin Ogunbiyi of Accord Party; Lasun Yusuff of Labour Party; Oyegoke Omigbodun of Social Democratic Party; Segun Awojide of African Action Congress; Kehinde Atanda of Action Democratic Party; Awoyemi Lukuman of Allied Peoples Movement; Adebayo Elisha of All Peoples Party; and Adeleke Adedapo of Boot Party.Rasaq Saliu of New Nigeria Peoples Party; Abede Samuel of National Rescue Movement; Ayowole Adedeji of Peoples Redemption Party; Ademola Adeseye of Young Peoples Party; and Adesuyi Olufemi of Zenith Labour Party also participated in the election.The election was held across 3,763 units in the 30 LGAs of the state and witnessed a huge voter turnout and was largely peaceful.Of the 1,955,657 registered voters in the state, 1,479,595 Permanent Voter Cards were collected before the election.To emerge winner, Senator Adeleke scored a final vote of 403,371 against 375,027 recorded by the defeated incumbent governor with a difference of 28,344The governor elect, Adeleke won 17 of the 30 Local Government Areas, while Adegboyega Oyetola won in the other 13 local government areas.Kehinde Atanda of the Action Democratic Party (ADP) came in at a distant third with 10,104 votes, followed by Akin Ogunbiyi of the Accord Party with 4,515 votes.Adeleke picked 17 LGAs, including: Ede South, Ifelodun, Boluwaduro, Egbedore, Odo Otin, Osogbo, Ila, Atakumosa West, Olorunda, Ilesa West, Obokun, Oriade, Orolu, Ife North, Irepodun and Ejigbo.The incumbent, Oyetola won in Boripe, Ilesa East, Ayedire, Ifedayo, Ife Central, Ayedaade, Iwo, Olaoluwa, Isokan, Atakumosa East, Ife South, Ife Central and Ife East.With the outcome, Bola Tinubu had been defeated in his home state, Osun, despite his Labour and rigorous ‘assistance’ that he gave to APC in his state.The outcome of the election has given room to mock Bola Ahmed Tinubu, that he had laboured in “vain”, and may be “labouring to die” – a direct reference to the statement made by APC Presidential Candidate in Osogbo, while campaigning for Governor Adegboyega.It will be recalled that Tinubu had mocked the PDP and in particular, the Labour Party, who he cursed that they will Labour in vain and die labouring.“Think about your children and vote accordingly, so you can see the future. Come out en masse.“Don’t mind PDP and other mushroom parties — parties like Labour; they will labour till they die. God will not make you labourers.” Tinubu had said.To keep the peace in the state, the Inspector General of Police, Usman Baba Alkali, had deployed about 21,000 police operatives, apart from other security outfits also present which included the military and the Nigeria Security and Civil Defence Corps.The poll was, however, characterised by massive vote-buying, which drew the condemnation of some candidates and civil society organisations. 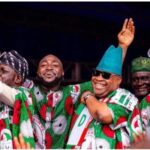 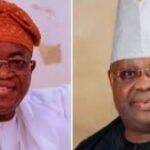 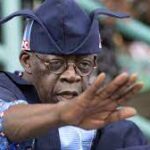