According to the party’s Caretaker Chairman, Dr Akindele Adekunle, the party were denied the use of stadium, Technical College field and the Freedom Park which it applied to use for the final campaign programme.

He added that the action revealed the plan of the state government to incite violence and disrupt peaceful election on Saturday.

“After due consultations with prominent stakeholders in the state, including our highly revered royal fathers, the leadership of our party, decided to make do with the vicinity of our state secretariat for our Mega Rally.

“Our party considers the action of the state government as an affront of a dying horse and a deliberate attempt to provoke violent reactions from the good people of Osun State, thereby, instigating crisis in the state. It is a shame and a dent on the noble race of Yoruba nation that a governor living at the mercy of tax payers money would find it convenient to descend so low.

“It is elementary for any reasonable government to know that public facilities are meant for public use. The main bowl of the Osogbo City Stadium we applied to use for today’s rally for instance, had been put in place and adequately maintained by successive administrations in the state for use of our people even before Alhaji Gboyega Oyetola retraced his history to Osun State from Lagos for political trading.

“We are not unaware that Mr Gboyega Oyetola by his refusal to grant our party, the required permission to use the facility, was just only testing waters of the large scale violence he is planning against the state. We want to assure him and his cohorts that he would be matched.

“Any attempt to subvert the electoral verdict of our people will be resisted as bonafide residents of the State. It will not be in his interest nor that of entire country to underestimate this resolve.

“While we call on President Mohammadu Buhari to be awake about the crisis Oyetola is brewing in Osun State, we call on our people not to be discouraged by the defeatist antics of Mr Oyetola and his baby vuvuzelas. This election is not just about the PDP or Senator Ademola Jackson Nurudeen Adeleke, but for the good of our people and humanity in general”, he said.

He added that not using a venue has no correlation with deployment of thugs, calling on security operatives to take cognisance of the threat issued by the PDP.

“It is unfortunate that the PDP due to lack of proper organisation decided to book the venues after other groups have done so. Other parties have used many public facilities, it does not determine who wins an election.

“A youth group booked for the stadium ahead of them, while the mini bus union is using the freedom park”, he said. 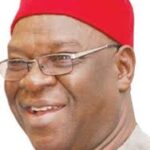