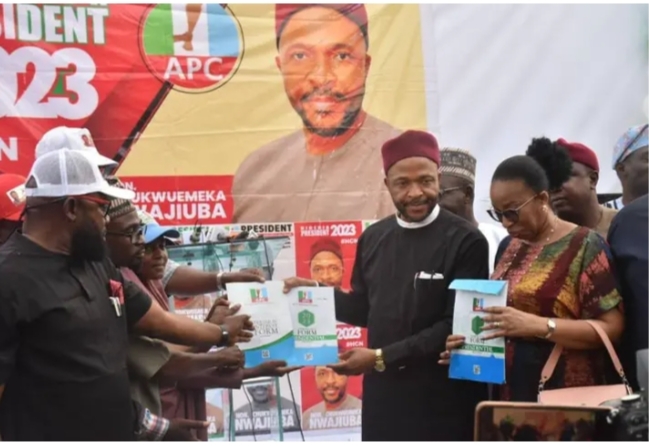 The minister of state for education chukwuemeka Nwajiuba has officially joined the 2023 presidential race after accepting his All Progressives Congress (APC) nomination and expression of interest forms presented to him on Wednesday.

According to Nwajiuba, the N100 million forms were purchased for him by the Project Nigeria Group.

The minister accepted the forms at a reception hosted by the group in Abuja on Wednesday, where he thanked them for gathering “resources from every part of the country” to purchase the forms for him.

In his acceptance speech, Nwajiuba said he accepted to run for the office of president under the APC and acknowledged President Buhari’s “extraordinary feats” in the last seven years.

“I now solemnly accept to run for us all, and bear our Party’s Flag into the elections and become our next President.

“I do this recognizing that in the last 7 years, President Muhammadu Buhari has performed extraordinary feats in ensuring that our progressive ideas have been established; physical infrastructure of every type, and inclusive policies reaching out to our poor and less privileged. As we strive to uplift Nigeria and Nigerians into a developed state,” he said.

Minister of State for Education, Chukwuemeka Nwajiuba, accepts APC Presidential Forms In Abuja
The minister added that a lot still needs to be done for Nigeria and its citizens and that he is ready to do what needs to be done to address the challenges.

“A lot still is outstanding and needs to be done. Many of our citizens are still outside, hungry, and unemployed. Many more are threatened by unwarranted and unnecessary internal security and economic challenges.

“Our calling today invites me to; take up a work path that builds on the solid foundations that have been laid thus far. Provide different paradigms for new challenges and provide the platform for a vista that accommodates subject experts to pull together forces to meet our nation’s challenges”, he said.

He invited other members of the APC to support his ambition to become the party’s presidential flag bearer.

“I, therefore, invite our dear party and its great men and women, to forge that trust in me, as their new symbol of unity, growth, and regeneration as we step into the future with renewed zeal and optimism,” he concluded.

Speaking on the ongoing Academic Staff Union of Universities (ASUU) strike, Nwajiuba said the government has done everything the Union wants, adding that although it is the government’s duty to give life to the 2009 agreement signed with the union and ensure that the universities are properly funded, the government’s funding is very limited.

“There is nothing that ASUU wants that we have not agreed to.

“And because of the additional challenges of security, they’ve had to repeatedly borrow money to finance tarp. However, the federal government has continued to contain this and pay the salaries. The quirks of some of the items that are initially included in the demands are the use of IPPIS instead of UTAS developed by ASUU,” he said.

The minister’s presidential bid is coming amidst the ASUU strike which began on February 14th, 2022 and which is in its 12th week.

ASUU had commenced a warning strike on February 14, 2022, to intensify its demands which include the renegotiation of its 2009 agreement with the government and deployment of the University Transparency and Accountability Solution (UTAS) to replace the Federal Government’s Integrated Personnel Payroll Information System (IPPIS).

On March 14th, the Union extended the strike by two months, until May 14th, indicating that the strike is not a fresh one but rather a continuation of the 10-month strike which began in March 2020 and was suspended on December 23, 2020.

Other demands by ASUU include payment of earned academic allowances, funds for the revitalization of public universities, promotion arrears, and poor funding of state universities. 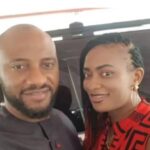