A former member of the Edo State House of Assembly Hon M.D. IGBAS says he has been vindicated on the alleged murder of his cook on the 31st of March 2022
In a press release signed by the former member representing Esan North East Constituency lol Edo state house of Assembly said at about 8pm on the said day while he was out of the house on an evening visit to some of his political friends around Uromi, his Country Home was attacked by unknown assailants and his cook ,Mary Atule, was murdered during the process. Hon Igbas Said that the assailants after murdering the cook ,kept her corpse at one of the boys quarters wardrobe in the house

He disclosed that On discovery Of the evil act the following day April 1st 2022 he reported the incident to the Uromi Police Station and the matter was later transferred to state CID on Tuesday 05/04/22 where he was detained for 3days but he was however released yesterday Friday 8th April 22 following the arrest the culprits who have since confessed to the crime.

Hon.M.D.Igbas who urged members of the public to always endeavor to be very diligent on the kind of people especially mallams also known as aboki they hire as domestic staff especially as security guards in their homes, revealed that from the investigation carried out by the police one of suspects happens to be a security guard to a high profile politician who lives along Uwalor Road UROMI and is also a relation to the boy who resides at his security post while the second suspect is also a security guard at a house down the street where he resides in Uromi

Sir-Ezehi Magnus-Desmond Igbas popularly called Hon M.D.Igbas and former Minority Whip EDHA 2015 to 2019 who prayed for the repose of the soul of Mary Atule to continue to rest in the Bosom of the Lord, thanked God he has been vindicated not have hand in the death of his cook and urged the Nigeria police, Edo state command to ensure the culprit are brought to justice . 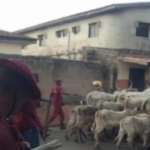