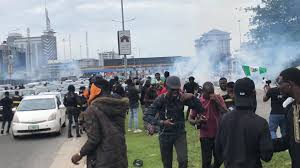 As some youths in Nigeria mark the one year anniversary of the #ENDSARS PROTEST where it was alleged that the Nigerian Soldiers fired live bullets at the protesters at the Lekki TollGate in Lagos, the Nigerian Police has again refused to allow some of the citizens to mark the one-year memorial of the incident.

The prevention of the memorial procession happened in many, Lagos, Abuja, Enugu, Ogun, Oyo amongst others.

It was an eyesore experience as security operatives fired teargas canisters to disperse protesters at Lekki Tollgate who were out to mark their one-year anniversary.

Police officers harassed an Arise TV crew covering the #EndSARS protest memorial at Lekki Toll Gate, and also tried to seize their drone which was recording the protest in real-time.

It was gathered that an unknown armed man reportedly tried to stab protesters shortly before the police raid.

A taxi driver was pepper-strayed by security operatives who attempted to force him into a Black Maria at Lekki Toll Gate following the ongoing #EndSARS protest memorial.

He was also heard saying that none of his “family members have entered such car”, while being dragged by security operatives.

The taxi driver had insisted on not entering the Black Maria as he’s not a thief.

One year ago, thousands marched in Nigeria for the #EndSARS movement to protest the activities of the now-disbanded Special Anti-Robbery Squad, a unit accused of police brutality.

While people ran away, one officer shot at a protester in a bid to arrest him, according to Lawrence Akinkpelumi, who was at the protests.

There are widespread accusations of police brutality in Nigeria and police often clamp down on Nigerians demonstrating against police. In the days leading up to Wednesday’s demonstration, police warned protesters against any public gatherings, threatening to arrest anyone who disobeyed the directive.

Protesters marched through the Lekki tollgate Wednesday, chanting and singing songs calling on authorities to ensure justice for those they say were arrested and killed by security forces last year during the #EndSARS protests.

Four protesters were initially arrested in Lagos just as demonstrators started to arrive at the Lekki tollgate to mark the anniversary. More were arrested and put into police vans as police shot teargas into the air.

Shuaibu Yakubu, 23, said the tear gas also got into his eyes.

“They started shooting tear gas at us and chasing people who came here to remember those killed in October 2020. All my eyes are full of teargas,” he said.

police officers harassed Arise TV crew covering the #EndSARS protest memorial at Lekki Toll Gate, and also tried to seize their drone which was recording the protest in real-time 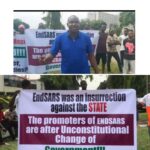 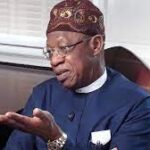 #EndSARS: One Year After No Evidence Of Killing At Tollgate - FG