The newly inaugurated EXCO of ITV/Radio Chapel of the Nigeria of Union of Journalist have paid a courtesy visit on the management of Independent Television and Radio, Benin

In her remarks the Chapel Chairperson, Comrade Best Imbiere who led other members Including Vice Chairman, Comrade Williams Babayem, Secretary Comrade, Emmanuel Akpololohor, Treasurer, Roselyn Ebhoramen, Financial Secretary, Martins Ugiagbe and Taye Ogunruogba said the purpose of the visit is to thank management for their support towards the success of the election and also to intimate Management on the Chapel’s agenda and solicit for support and blessings.

Comrade Imbiere who was apparently elated at the opportunity to lead the Chapel said the new EXCO under her leadership is irrevocably committed to contributing to the development of the organization hence they have outlined projects to execute both on the short and long term. Some of the projects proposed for execution are installation of solar street lights, execution of 2021 press week and training programmes amongst others 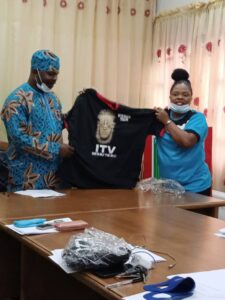 The new EXCO Chairman while commending the General Manager of ITV, Senior Elder Ogbeide Uwumwonse for his leadership sagacity and administrative acumen culminating in the progress of the organization added that the elevation of the general manager to the position of Director of ITV/Radio worldwide is a testament of the outstanding contributions of Elder Uwumwonse.

‘‘Under your leadership, two studios were built, new road and landscaping executed, ITV now has a worldwide presence on satellite, boreholes constructed amongst others”

Comrade Best Imbiere thereafter used the opportunity on behalf of the new EXCO to present a giant card with congratulatory message to the New ITV director worldwide as well as presentation of an award of excellence in appreciation of Elder Uwumwonse immense contributions to the organization and advancement of the broadcasting and journalism profession.

Pic 3 Presentation of Card and Award

Responding on behalf of management the director ITV/Radio Worldwide Senior Elder Ogbeide Uwumwwonse who congratulated members of  the new Exco ITV/Radio NUJ Chapel on their election pledged management to help them actualize their dreams and aspirations through their maintaining that management will spare no though in projecting the members  to the state and federal levels of the NUJ.

Elder Ogbeide Uwumwwonse urged the new EXCO to allow the core values of journalism professing be their guiding principles in all their dealings and activities especially in the registration of new members to uphold the integrity of the projection and the organization. 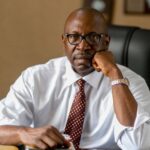 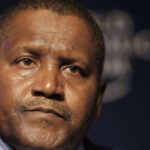